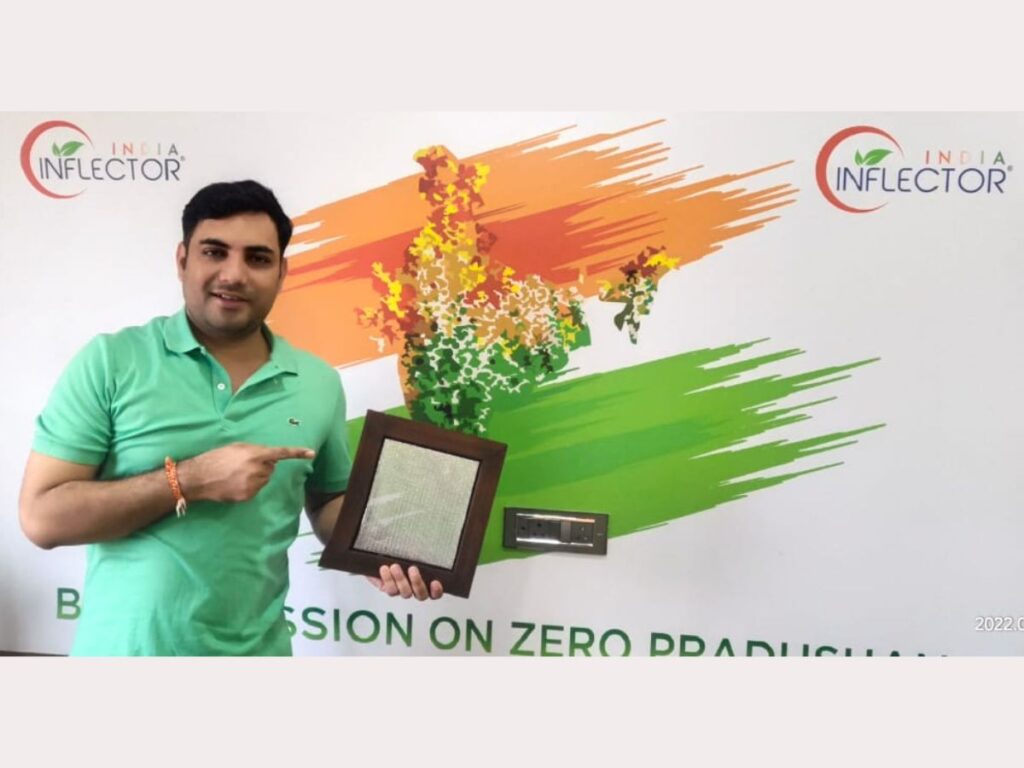 The Inflector is a solar heat barrier designed by NASA, which was first used in 1960 in the spacesuits of astronauts during the Apollo missing. The Inflector’s use started in the 1990s. Inflectors are in use in more than 60 countries today.

Inflector India Private Limited holds distribution licence for Inflector technology for several countries including India. Inflector India has taken on InFlector as the new product that takes pride in its energy efficient qualities and unique make.

Inflector India Co-Founder Sandeep Choudhary is a save Earth activist and his works towards environment conservation has been recognized on several national and International platforms. Mr. Choudhary’s Biggest Mission to save earth has found major synergies with Inflector capabilities in the field of Environmental Solutions and Energy efficiency.

“Research has shown that 75% of the solar heat comes through the window. The Inflector is installed at the window and it reduces the heat coming through it by 70-80% and thus it reduces the carbon footprints, during winter the Inflector can be reversed and it help in keeping the indoors warm by absorbing sunlight. Again, energy use can be curbed, which means lower carbon emissions,” Sandeep Choudhary shared.

Inflectors made by Inflector India can be used for as long as 25 years. Sandeep Choudhary said that to encourage the wider adoption of Inflectors in the country, they are making them available at a significantly lower cost than in other countries.

Save Earth Activist Sandeep Choudhary has recently been honored with the prestigious Zee National Achiever’s Award 2022 and recognized him as “Social Change Maker”.

Mr. Choudhary has a strong background in technology and real estate, left his fin-tech startup BankSathi Technologies, a VC-funded USD 50 Million company, for this world’s biggest mission to save our planet Earth. Sandeep Choudhary’s path-breaking achievements as an entrepreneur and thoughtful initiatives as a save Earth activist have been recognized by the government and several national and international agencies. In the year 2016, he was invited as a delegate with honourable Prime Minister Narender Modi Ji on his Japan delegation.

Earlier this year, he was conferred an honorary doctorate degree from the American University. He has been felicitated with India’s Biggest Shaksheeyat Awards by Honourable Governor of Odisha. On World Environment Day, he was honoured with the Global Business Achievers Award in Delhi. The Zee Media Group gave him the Rising Star Award for his meteoric rise as an entrepreneur. Another notable award won by him is the Best Technology Entrepreneur Award by CNBC Awaaz.

Sandeep Choudhary explains more use case of Inflector product and how it reduces the energy utilization. “Global warming is a real threat to the planet and us, and all of us need to contribute in every small and big way to find a solution to the challenge,” added Sandeep Choudhary.

More info on Inflector and booking information is available on official website – https://inflectorindia.com