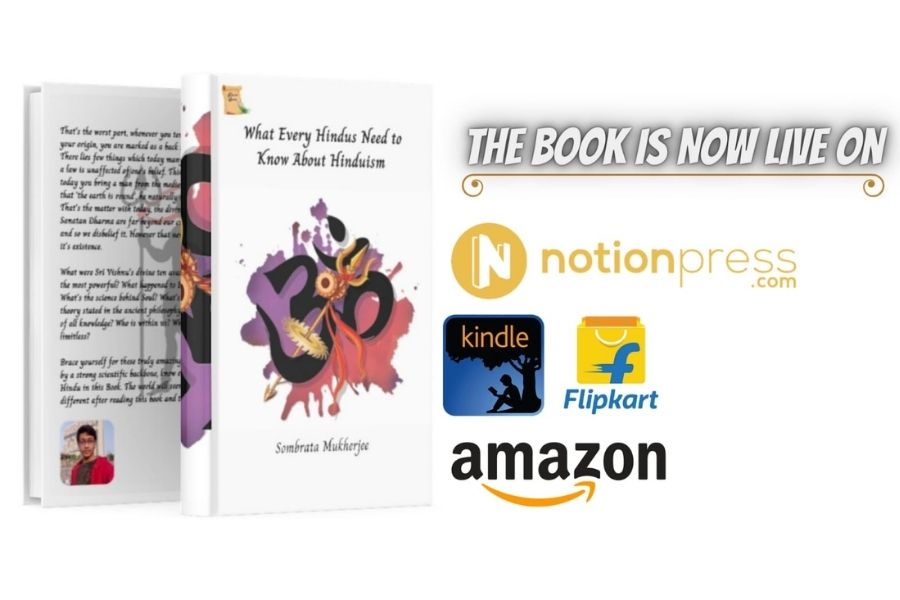 About Sombrata Mukherjee & His works

That’s the worst part. Whenever you tend to learn about your origin, you are marked as a standard back identity. There lie a few things which today many don’t believe. But the law is unaffected by one’s belief. Think of it, if now today you bring a man from the medieval age and tell him that ‘the earth is round’, he naturally will not believe it. That’s the matter with today. The divine knowledge of the Sanatan Dharma is far beyond our current intelligence, and so we disbelieve it. However, that never questions its existence.

What were Sri Vishnu’s divine ten avatars? Why is Shivā so powerful? What happened to Brahma’s 5th Head? How the world goes as per the Kal Chakra? What’s the science behind the Soul? What’s the Multi-Verse theory stated in the ancient philosophy? What is the supreme source of all energy? What is the origin of all knowledge? Who is within us? What is the limit of limitless?

Brace yourself for these genuinely amazing answers supported by a solid scientific backbone and practicality. Know and learn everything about Hindus in this book described vividly through multiple scripture references, Sanskrit Slokas and their translations, and logical explanations. After reading this book, the world will seem completely different, and that’s a promise!

Sombrata Mukherjee is a newborn writer who is now writing professionally over the past few years. He has had a passion for writing from a very young age, literally even before finding the essence in reading. He used to listen to the Legendary tales of Indian History, Gods from his late grandmother Gouri Mukherjee. This stirred him to write something equally mesmerizing. This grew up a passion for writing within him, even before he started to read by himself at a later period. He started his unofficial writing journey at around ten with comic strips, poems, and stories from a very early age. Scarcely had meanings in them, but the talent to compose in future was foreshadowed.

At 19, Sombrata published his first book ‘Temptations’, a collection of classical love poetry (completed while he was 17). Next, he published the book “What every Hindu need to know about Hinduism” (a complete work on Hinduism, part 1). Earlier, he wrote various unpublished short stories, including ‘My Last Day in Park Street Cemetery’, ‘Along With Us, Disloyal’, and such. Mukherjee also has a great passion for his native Bengali and has composed works in the language like ‘Bipin Babur Camera’, ‘Nikhilda Samagra’, ‘Haariya Pheliyachi’, ‘Bigyaner alap sahitter songe’, and others. He has worked in over three English anthologies magazines, was nominated in INBW (India’s Next Big Writer), and has a certificate. Sombrata is also the possessor of the prestigious 21st Emily Dickinson Award (for his book ‘Temptations’) and the Jane Austen Award from Book Leaf Publishing.

Sombrata passed out from St. Judes High school Madhyamgram with Computer Science and is currently pursuing the Mass Communication and Journalism stream at Amity University Kolkata. He often tells of getting a combined inspiration from his parents, chiefly from his mother, Soma, who inspired him to read and write to a greater extent. Mukherjee’s father, Subrata, is the possessor of various children’s comics (chiefly in Bengali), magazines which mesmerized Sombrata’s taste in comics and Literature. The young writer has a great interest in classic genres starting from novels to short stories, poems and plays and is often inspired by classic writers.

‘You can hear Literature’, says he, ‘even when it does not speaks, and that’s the essence. It is beyond praise and possesses the ability to stir your mind, even though you are reading a book sitting in a particular corner.’

Dr. Deepak Singh’s Book ‘His Holiness THE DALAI LAMA and His Footstep’ Is Getting Rave Reviews*